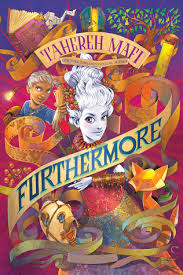 Alice Alexis Queensmeadow 12 rates three things most important: Mother, who wouldn’t miss her; magic and color, which seem to elude her; and Father, who always loved her. Father disappeared from Ferenwood with only a ruler, almost three years ago. But she will have to travel through the mythical, dangerous land of Furthermore, where down can be up, paper is alive, and left can be both right and very, very wrong. Her only companion is Oliver whose own magic is based in lies and deceit. Alice must first find herself—and hold fast to the magic of love in the face of loss.

“She’d decided long ago that life was a long journey. She would be strong and she would be weak, and both would be okay.”

This book was the cutest thing ever. I’m not much of a Middle Grade reader, but I smiled so much while reading this.

In a world full of color and magic, Alice has neither. Her hair and skin is milk white— with the exception of the light brown of her eyes and the light pink blush on her cheeks, making her an outcast in her town, Ferenwood. When Oliver, someone she does not like, asks her to help him find her father who has been missing for 3 years, she jumps on the opportunity. But Furthermore is much more dangerous than she expected…

“Why must you look like the rest of us? Why do you have to be the one to change? Change the way we see. Don’t change the way you are.”

This book has so many interesting elements. Like how the people of Ferenwood are POC? It’s mentions of everyone having very pigmented brown or dark skin and colorless Alice is the outsider in town which is such a twist on how society is in real life.

I’ve seem a few complaints that the book was too whimsical and the magic system was confusing, but I feel this is one of those books that you just have to go along with the ride. Me, loving purple prose and whimsy, had no real problem. When Oliver explained the magic systems of Furthermore, I was kind of like I totally get it. Speaking of the characters, I loved them so much. Including the Origami Fox. He was there for one pivotal scene, then he left 😦 but I loved him, okay?

“Alice would choose to love herself, different and extraordinary, every day of the week.”

Now, back to the main characters— Alice was amazing. Did she make mistakes? Yes, quite often if I may add. She had this sense of invincibility that all kids have at that age, making her impulsive. Did she try to fix them? Yes.

Oliver… he was a mean person towards Alice. He withheld information that probably would have prevented certain things from happening. Like, why aren’t you telling her she not supposed to do that, then get mad at her for not knowing.? However, their development and friendship became goals. Absolute. GOALS. The support, the unwavering trust that was built. I love them so much. We need more male/female friendships in books, pass it on.

My main problem with this book was the ending. Alice’s mother was not the nicest, so when she returns from her adventure, everything is wrapped up so nicely. And this doesn’t apply just to the mother— the whole ending is perfectly wrapped up.

Any consequences that could’ve happened to any of the characters, disappeared. Which sucks, because something huge did happen that got eradicated by that ending. However, all in all this is a cute, quick read that you could probably knock out in a day. If you don’t mind whimsy and cute times 20, check this out.