I’M ON THE BLOG TOUR FOR THIS AMAZING BOOK. SPOILER ALERT: YES, I HIGHLY RECOMMEND. 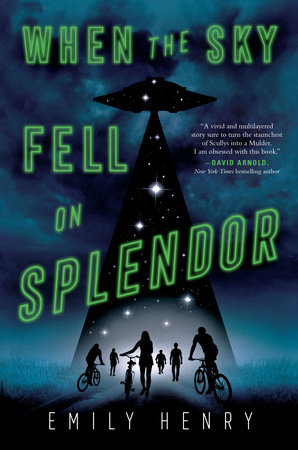 When the Sky Fell on Splendor

Almost everyone in the small town of Splendor, Ohio, was affected when the local steel mill exploded. If you weren’t a casualty of the accident yourself, chances are a loved one was. That’s the case for seventeen-year-old Franny, who, five years after the explosion, still has to stand by and do nothing as her brother lies in a coma.

In the wake of the tragedy, Franny found solace in a group of friends whose experiences mirrored her own. The group calls themselves The Ordinary, and they spend their free time investigating local ghost stories and legends, filming their exploits for their small following of YouTube fans. It’s silly, it’s fun, and it keeps them from dwelling on the sadness that surrounds them.

Until one evening, when the strange and dangerous thing they film isn’t fiction–it’s a bright light, something massive hurdling toward them from the sky. And when it crashes and the teens go to investigate…everything changes.

I may be biased, since Henry’s books are made for me, but are we shocked I loved this? Are we shocked that I may or may not have cried? .

There’s found families and unwavering loyalty and unspoken truths and grief and aliens.

I mean, a group of friends go out to an abandoned house of a murderer for their Youtube channel when something fell from the sky, leaving htem in a field with mysterious scars, weird patterns in the grass and the cows are acting strange.

If you can get past the heavy exposition in the beginning, this book doesn’t slow down. There’s a sense of haste in the crew finding out what’s happened to them and why, all while avoiding the FBI when their video goes viral.

Now, these character are quirky. They’re weird and have their hallmark, over the top vices, but that’s the fun thing about this story: there’s always depth. They mention multiple times that they’d probably never would have been friends or even spoken if this tragedy didn’t take place.

Yet they found something in each other that brought them together- grief. They were the Ordinaries, kids who were invisible and alone in their sorrow after a Mill accident that killed someone close to them. Their eccentricity was a mask on their pain and the slow reveal on their insecurities and the depth of their heartbreak… it was well worth the wait and made me love these character even more.

The ending reveal was a bit confusing… I come up with a lot of theories and explanations and speculations just to make it make sense, but I still liked it and though it was kind of the perfect ending for this story. It just took me a minute to get to an understanding of what actually happened.

This book is love and late night coffee and heartbreak and magic. And I loved it to pieces ?

Emily Henry is the author of The Love That Split the World and A Million Junes. She is a full-time writer, proofreader, and donut connoisseur. She studied creative writing at Hope College and the New York Center for Art & Media Studies, and now spends most of her time in Cincinnati, Ohio, and the part of Kentucky just beneath it.

9 thoughts on “{Blog Tour} Review: When the Sky Fell on Spendor by Emily Henry”