Fall of the Gas-Lit Empire #1 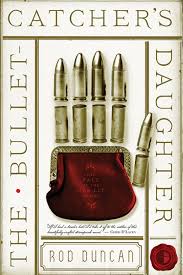 Elizabeth Barnabus lives a double life—as herself and as her brother, the private detective. She is trying to solve the mystery of a disappearing aristocrat and a hoard of arcane machines. In her way stand the rogues, freaks and self-proclaimed alchemists of a travelling circus. But when she comes up against an agent of the all-powerful Patent Office, her life and the course of history will begin to change. And not necessarily for the better…

“Men fancy that they recognise a woman by dress, figure and face but it is more through movement that gender is revealed.”

It’s been about 2 years since I’ve read this book, but it’s okay— this was an amazing story. I did read this when I was around 14 or 15, so things may have went over my head, but I appreciated the things I did notice.

Elizabeth Barnabus is the single child of a “bullet-catcher”, a term used to describe stage magicians known for doing grand illusions, but she uses these tricks to fool into thinking she has a twin brother. Pretending to be her fictitious brother Edwin as a private detective, Elizabeth sets out to solve the case of a missing aristocrat while dodging alchemists and shady circus folk as well as agents of the dictatorial International Patent Office.

“There is no more complete and satisfying way for a man to disappear than for him to have never existed.”

Right off the bat, I was expecting some bullet catching… heads up, you won’t find that here. Instead I found a world subtlety being unfolded. Instead of info-dumping, the history of the Gas-Lit Empire is utilized to show how this world came to be, such as the war that divided England or the rise of the Patent Office, it pretty easy to piece together everything.

Yet, this isn’t a fast paced read. This is a mystery that isn’t fed to the reader— you find out what’s happening with our main character. And speaking of our main character, she was amazing. Hiding under the nose of the Patent Office for all these years, her skills at illusion, manipulation— Elizabeth is a very capable woman. We learn about her as the story goes along, but she still withholds things about herself, making me want to know more.

You know what the best thing about this story is? There’s no romance. None. Nada. Nilch. If I’m reaching, there could be something in the veeeeeeery far future. But there is no romance in here. Elizabeth is too worried about keeping her identity secret while finding this person to be thinking about men.

I did mention above that the pacing is slow, I did have to take breaks and pace myself. But, this was a really fun story and the cover is gorgeous—I noticed throughout this whole review I didn’t mention the beautiful cover… there you go 🙂 .

4 thoughts on “Review: The Bullet Catcher’s Daughter by Rod Duncan || Wasn’t what I was expecting, but good nonetheless”

Find Me Here As Well :D