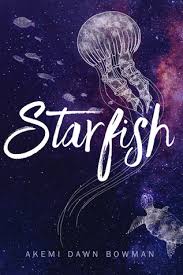 Kiko Himura has always had a hard time saying exactly what she’s thinking. With a mother who makes her feel unremarkable and a half-Japanese heritage she doesn’t quite understand, Kiko prefers to keep her head down, certain that once she makes it into her dream art school, Prism, her real life will begin.

But then Kiko doesn’t get into Prism, at the same time her abusive uncle moves back in with her family. So when she receives an invitation from her childhood friend to leave her small town and tour art schools on the west coast, Kiko jumps at the opportunity in spite of the anxieties and fears that attempt to hold her back. And now that she is finally free to be her own person outside the constricting walls of her home life, Kiko learns life-changing truths about herself, her past, and how to be brave.

“But some people are just starfish–they need everyone to fill the roles that they assign. They need the world to sit around them, pointing at them and validating their feelings. But you can’t spend your life trying to make a starfish happy, because no matter what you do, it will never be enough. They will always find a way to make themselves the center of attention, because it’s the only way they know how to live.”

This book. This freaking book. Let it be known that I bought and read this book with no intention of having my emotions all over the place. I also wasn’t planning to read it the day it showed up to my door, it was going to be saved for a day when I wasn’t trying to clean the house.

Next thing I know, I’m in bed, angry tears and sadness and emotions all over the place. So, please excuse the lack of organization and length of this review.

“I draw a girl without a face, drawing somebody else’s face onto her own reflection.”

Kiko, a half asian-half white girl is an artist trying to get into her dream school Prism. Only… she doesn’t get in. Now she has to stay with her mother  Dealing with this, her anxiety and terrible home life she bumps into her childhood friend Jamie, who invites her to California which is where she starts to find herself.

Right off the bat, Kiko had my heart. How she dealt with her insecurities over her race, blaming herself for the divorce of her parents… and her mother… I so admired her strength. I love how her art was an outlet for her emotions and after each chapter we got a glimpse of what she drew.

“The painting isn’t about the starfish. It’s about the girl who wants to venture out into the ocean, away from the starfish, so she can feel like she matters.”

The way she described her relationship with her brothers made so much sense to me. I especially leaned towards her younger brother, Shoshi. The way he found solace in embracing his Asian culture was heartwarming to me.

Now, I don’t want to talk about her, but I must. Her mother… this woman made me rage. I may have yelled at my book multiple times. Tears of rage were coming out of my eyes, I just… couldn’t.

“But if I could fix myself and turn off the anxiety long enough to feel normal, I would have a long time ago.”

And she had such a huge influence on Kiko’s life, how she saw herself, her self doubt on how people saw her… she was the Worst. And I appreciate how the end wasn’t this ‘Let’s all hug, I have seen the error of my ways’ type of ending; it was realistic.

However, she wasn’t… complex or 3-dimensional. I felt a sense of being evil just for the sake of being evil. But maybe that’s life. We don’t know why a person’s the way they are and we just have to accept that there’s nothing we can do but take care of ourselves and those we love. So that aspect didn’t hinder my enjoyment of the story.

“We all have to dream our own dreams. We only get one life to live—live it for yourself, not anyone else.”

On a lighter note, Jamie was just the most amazing, supportive friend turned boyfriend. I love how he had his problems and wasn’t perfect and Kiko’s conversation about not wanting to need him and have to be independent was so important to bring up. There are so many books with the MC being “fixed” by their boyfriends, so this was refreshing.

The Chinatown scene was especially cute and important to her journey of finding herself and coming to terms with her insecurities over her being biracial. And speaking of amazing people, Hiroshi and his family was such a sweet addition to the story. Helping her expand her art, while giving her wise words, they showed her what a family full of love was like and my heart is full of affection for this book.

“Hearts aren’t meant to be broken an infinite amount of times.”

I’ve noticed in contemporary books the conflict usually towards the end and are so blown out and over dramatic and while I did guess that little plot twist (though just before it was revealed) it still hit me. I thought it was handled realistically and the end may or may not have made me cry some happy tears.

Now, I didn’t mention her dad because he wasn’t really in the book that much, but from what we did get he was sweet. I wish he would’ve taken more of an initiative, but it was explained why he was in the background. Overall, this is a favorite of 2017, maybe even all time. We need more important books like this.

10 thoughts on “Review: Starfish by Akemi Dawn Bowman || Emotions and anger and hope”

Hi ✨
First post of the year! ✨
🕸 Halloween is upon us… and all I want to do is play Animal Crossing 🕸
🍃Tour Stop🍃
This was a photo I had taken…. in January? And it was one of those pictures that I had wanted to post after I’d read the book so I could give my thoughts and opinions… ✨
At approximately 9 am on August 23rd 2021, I woke up and decided to take a picture. 📸
What’s the most random thing you’ve done as of late? 📚
Wow…. Long time no see yeah? 🤭
✨ Non Bookish Post ✨
Loading Comments...
%d bloggers like this: